David Taborn (b. 1947) is a British artist who paints large abstract canvasses with oils and resins, as well as large scale immersive watercolours and 3D objects that reflect a painterly language. Taborn has exhibited in several solo shows internationally and has been honoured with three fellowships and several awards, including the prestigious Pollock-Krasner Foundation Award and, most recently, the Gottlieb Foundation Award. His work is held in private and public collections, including the Courtauld Institute and the Nesta collection.

Can you tell us a bit about your background and your art practice?

My father was a toolmaker and my mother a seamstress. We lived in a two-up two-down terraced house in Birmingham near Winson Green Prison. Sharing a very small, badly lit room with my older brother might be why I love having a studio.

The School Careers Officer recommended a career in accountancy, on account of me being good at numbers. This “career” lasted five months. Next came Germany. I became a postman in Kornwestheim for a time and started to draw whenever I could. I began to earn my keep with drawings and thanks to an American army sergeant I bumped into, was commissioned to paint a large landscape in oil on canvas. I started to think that maybe I could paint for a living.

Did you always know that you wanted to be an artist? How did you start out?

I knew by then that all I wanted to do was draw and paint, although the notion of being an “artist” seemed way too grand a concept. I was determined however to study art in more depth and so came back to England with a folder of drawings and applied for a place at Birmingham College of Art.

From there I went on to the Slade School of Fine Art to do a postgraduate. Since then, I’ve had three fellowships. The first was at Nottingham University in a campus studio surrounded by sympathetic and curious academics from all disciplines, which provided a stimulating ready-made audience.

The second, two decades later, was a Nesta fellowship, which was very different in that I worked in my own studio.

Lastly came a fellowship at UrbanGlass studios in Brooklyn, New York. Skilled studio technicians well versed in the craft of glassmaking and neon were around to make up for any knowledge shortfall on my part. So, it seems that “wanting to become an artist” and “starting out” gives me too much credit for decision-making.

It’s a modestly sized timber-built studio that has no windows – only a Velux rooflight that opens. There’s a sealed atrium that captures and kills lost insects and not much else. My builder friend Peter and I built it in 2007. It’s in Stockwell, so nice and easy to get around from.

Most days begin much the same… a large, strong filter coffee and toast in the studio, while I gawp at stuff on the walls, unless something has been drying, in which case I rush to see how it’s turned out.

There always seems to be some work on the go and needing attention, unless I’m about to start a new big piece. When that’s the case, I potter about, endlessly cleaning containers, brushes, surfaces, anything to avoid engagement. Until hollowness frogmarches me to the work and I begin.

Whilst you have a multi-media practice, it seems painting has always played a role. What do you find exciting about painting as a medium?

It’s still a powerful device for increasing tensions of ambiguity between 2D and 3D. Finding new ways of animating a flat surface with colour and gesture has been central. That’s why the sensual manipulation of materials is so important. A motivational hedonism that helps gestation.

It shouldn’t be a purely cosmetic exercise; the activity needs to resonate beyond the surface to prise result from intention. There’s an aphorism: “Thinking is more interesting than knowing but less interesting than looking”, which is how it is for me.

I’ve always worked concurrently on paper, whether watercolour, pastel or combinations of both, which is why I have an area of the studio specifically for this. I love the organic simplicity of the medium. Sometimes it can be an antidote to the more physically well-endowed confrontational mark-making of angle-grinders and blowtorches that I’ve employed in the past to draw with.

How has your work evolved in recent years?

After once seeing a postcard of a Neanderthal man that I mistook for a photo of me, I’ve never felt totally evolved and that’s the way I think it is with my work. It’s a bit like line-dancing: one step forward, one to the side, a bit of moonwalking and the inevitable faceplant!

My recent work harks back to the early 90s. In particular, the 1991 painting ‘Factual Nonsense’ (pictured). Like a palimpsest, it’s layered with incidents that surface and disappear, only to emerge elsewhere across the canvas. So, if there’s been evolution, it’s a fractalised one.

Can you tell us about your process and your relationship to materials?

My approach is one of distillation, irritation, and osmosis, which is why I need a lot of interference from objectness. I’ve always held that there needs to be stuff hanging around that can be pounced upon readily. So, although I must be organised in the studio, I try not to make things “too much trouble” to get to. How to express time in painting that goes beyond deconstructive archaeology has been a major preoccupation of mine.

The artists I admire have found their own ways. Take Bonnard. As you approach a Bonnard, certain elements reveal themselves to you in real time. You might notice the emergence of a small dog from within a wall, the slightly upturned vessel of liquid exposing its contents to you as if from a drone, the penumbra of painted layers that guide you back to the starting point, the perplexing ambiguity of a form that oozes meaning but can’t be pinned down. All of this and much more housed within a flat object on a wall.

How do you start new work, is it planned and thought out as a body of work, more of an instinctual process or a bit of both?

It’s not so much starting new work, more like coming across a snag of wool and picking at it. When it’s going well, I feel like a willing accomplice hanging on to every word. A breadcrumb track taking you back to where you started from. I try to paint what I want to see.

Do you have any go-to tools in your studio that you could not make work without? How do you use them and why?

Apart from brushes – and I have hundreds – I’m a big fan of the mahlstick, but it can be as hard to work with as without. I’ve used it for air-painting, delicate close-up work, extended gestural painting, obscuring sections of the painting and as a Velux opener.

Although not a tool, I need the purity of distilled water to prevent granulation in the watercolours and I’ve drawn with cremated flapjacks and used a magnifying glass on a hot day, so there are ways to make marks beyond the conventional.

We have been speaking with artists about their ‘studio hacks’, how they recycle items in the studio as DIY painting tools or storage. Do you have any items you re-purpose to use in the studio?

I’ve recommissioned many trolleys in my time. The largest, from an abandoned school dining hall, has a sheet of plate glass on top that I use as a palette. Below are trays filled with essentials: oil paint, thinners, oil sticks, masking tape and so on. On the side I’ve attached a kitchen roll holder. It’s a bit like a hospital trolley that gets pushed from patient to patient.

A recent addition to my armoury is super magnets. Because I have been producing many watercolours, I wanted to be able to shuffle them on the walls without screws protruding, so I set hundreds of small magnets into the plywood clad walls.

I remember a long time ago, when I was using polyester resin as a medium and repurposing half a dozen motors from scrapped movie projectors that my brother gave me, I made wooden stands and attached paint-mixers to them over buckets. This meant that I could add the catalyst simultaneously, giving me at least 20 minutes to apply the six colours to the canvas before they set.

Do you have a favourite colour or palette? If so, what does your palette include and why are these colours important?

Currently, it’s Naples yellow, but I’m very fickle. Green has very interesting range but just doesn’t seem to know it’s place. Cobalt blue cuts holes in the wall and seems the last to disappear as darkness falls. Yellow can be the Mr Creosote of the palette.

I think the artists that I find most arresting tend to have died. A dead “contemporary” whose work has always interested me and who now – 40 years after his death – is being rescrutinised is Philip Guston. Anselm Kiefer, my generation and still alive, is a wonderfully intriguing artist.

What was the best piece of advice you were ever given?

My mother used to say: “Don’t worry worry, ’til worry worries you.” Best advice ever.

Art-wise, I remember my accountancy lecturer complimenting me on the drawings in the margins of the ledger book and saying how much more impressive they were than my feeble double-entry disregard for symmetry and that I should pursue a career in art instead of bookkeeping.

Do you have one piece of advice to share with an artist just starting out?

Stop starting as soon as you can, it’s not good for you. It gives you delusions of adequacy.

Are there any current or upcoming projects that you are happy to share with us?

It’s now 30 years since I painted ‘Factual Nonsense’ – the painting that gave name to Joshua Compston’s iconic gallery a year later. I still have it. I’d very much like to have that painting and some of the recent works on canvas shown together along with the large watercolours I’ve been working on.

All images courtesy of the artist. Click here to see more of David Taborn’s work. 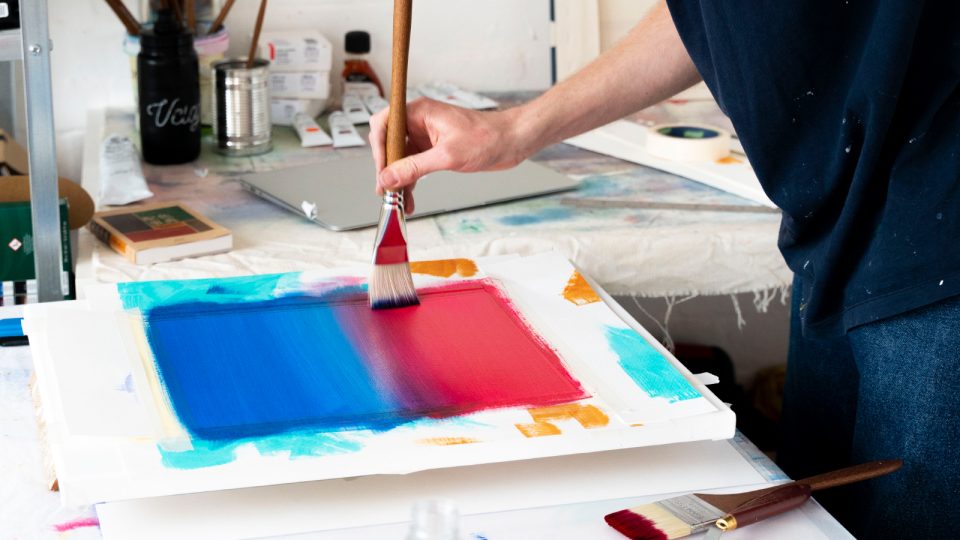 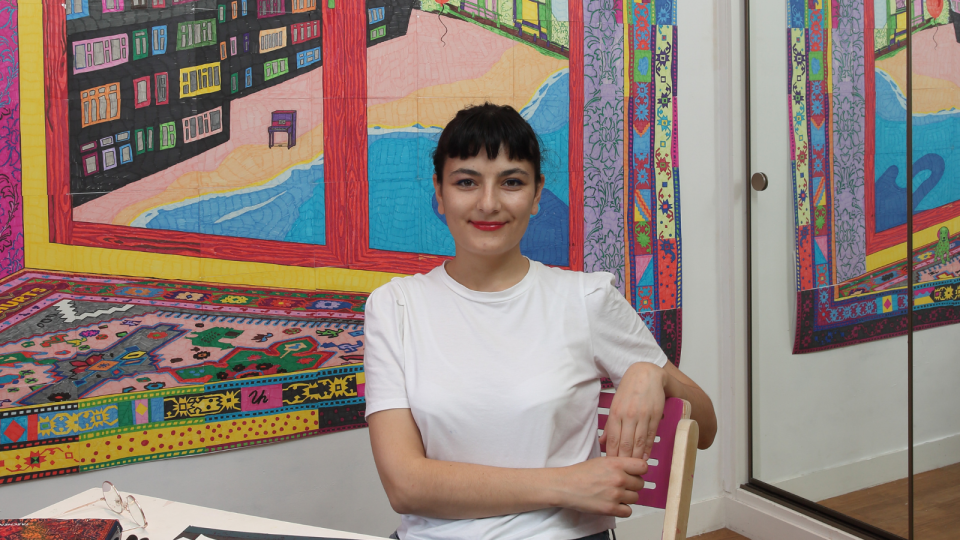